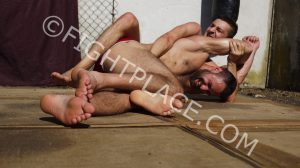 The sun is shining, it is hot and thus the opportunity to train the Fightplace teams to move into the open. Bubu and Hardy want to toughen your muscles and work out some exercises in boxing. But then Hardy and Tibet interfere. Tibet has as always big mouth and mocks the slender guys David and Bubu. but Bubu and David can not be intimidated. Both are well-trained and how from previous fights of both white, very hard in the take and dish out. Thus they avoid this confrontation not and are ready for a small tournament. After hot in the first fight this sunny afternoon Bubu was competed against Hardy (Sunny Afternoon Wrestling 4), have laid an extremely hot Submission Fight in the second match Tibet and David (Sunny Afternoon Wrestling 5), it is time for the fight between Tibet and Bubu.

Tibet, as well as physically superior to even the fight against David. He is bigger and heavier than Bubu. But each of Bubu knows know him do not mind and he still his man stands.

A quick headlock scheduled Bubu can score right at the beginning. But still in the grip of Bubu grabs Tibet the wiry boy and lifts to then unceremoniously throwing him to the ground him in a bear hug. But Bubu leaves Tibet not from his grasp. For a time, he may still keep him, but then Tibet can free themselves. And immediately he tries to get Bubu in a body scissors, which he succeeds in quickly also. Now it looks bad for Bubu. The more so as Tibet also still exerts Crotch-grabbing him. That’s enough to him and he takes along all the strength to free himself from Tibet handle. He manages and brings Tibet quickly into his hand. It’s fast, I’ll give him. Now Bubu Tibet in a head scissors and leaves him only once floundering awhile. Scissor can Bubu so quite well and just like Tibet, he likes to dominate his opponent when he has him erts times under control. To see the next minute for Tibet not good. Although he can from the Scissor extricate but Bubu has him quickly among themselves and now dominates the schoolboy. Muscle riding he especially loves 🙂 Tibet “boils” with anger and heat, and as Bubu still then grabs him in a full nelson and in a headlock, he is nasty and engages Bubus Balls. For a time he holds through, but then Bubu must release him from his grip.

After a short cooling by Hardy that tilts a little water over the two, it goes into the next round. Bubu fits like hell not to get into one of the leg scissors. But after some time passed the almost inevitable. Tibet gets him into a very nasty head scissors, arms twisted him while on his back and may exercise wedgies, ball grabs and other small cruelties to Bubu. Some minutes must Bubu this ordeal to go through to Tibet dismisses him from his clutches.

In the next rounds shows that Bubu rivals that Tibet. It is dirty and somewhat brutal. Your pants are subjected to harsh ordeals and their balls still have to endure. Whether Bubu even wins by these nasty tricks at the end?