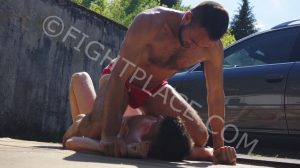 The sun is shining, it is hot and thus the opportunity to train the Fightplace teams to move into the open. Bubu and Hardy want to toughen your muscles and work out some exercises in boxing. But then Hardy and Tibet interfere. Tibet has as always big mouth and mocks the slender guys David and Bubu. but Bubu and David can not be intimidated. Both are well-trained and how from previous fights of both white, very hard in the take and dish out. Thus they avoid this confrontation not and are ready for a small tournament.

is Having competed in the first fight of this hot, sunny afternoon Bubu against Hardy (Sunny Afternoon Wrestling 4), now go and David Tibet on the mats. Tibet thinks that it is an easy game for him because he rarely has time lost a fight. His trained by football, enormously strong legs wore down so far at his opponents. Even to the stocky, muscular Arabs brings a lot of weight on the scale. Now he gets to do it with David. Much younger, more delicate and therefore more easily. But no less ambitious and sporty. Moreover enormously flexible, fast and strong. A fight between Albanians and Arabs. From the outset, you notice immediately that is fought here with a harder pace. Tibet naturally brings immediate Scissors in all variations in the fight a. With his strong thighs and legs he grabs David in Bodyscissors so David know what hit. And Tibet Headscissors have it in them. With David nobody wants to change this situation. But the Albanians suggests bravely and get several times the opportunity to grab Tibet and to keep up with head locks or schoolboy. In part so violently that Tibet only can free with Crotch-grabbing and ballgrabs from his crummy situations. David in his sexy gloss Shorts must still endure some nasty those handles in the regard. Tibet has no mercy for him. He grabs him in Bearhug, tears in his shorts, twisted his arms behind his back and puts his foot in David’s face. Not enough, if he has it already in schoolboy- or Bullypin below; No, he tortures him even with Nipple Torture and muscle riding. Regularly providing for a small cooling when Hardy and Bubu water over the two warring guys pour. But this reduces the heat in this fight not. All respect for David, who is a match for Tibet in this fight. Brave, without fear and with full power he goes every round again going to Tibet. The turn has clear effort to get the combative David in the handle.