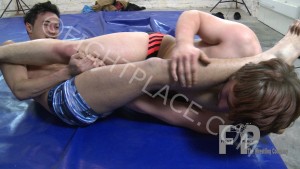 Sejam is new to Fightplace and comes for a fight with Ramon from afar arrived. Our guest from the Far East want the young powerhouse Ramon show what tricks he’s got and since muscle mass is not ALL. The tension in the fight rising continuously. Both fighters give the enemy no. It quickly passes into the ground fighting from the stand. Sejams technology is already very good, but it may at first the hard drop Attacks by Ramon oppose little. After about 20 minutes the tide turns, however. Sejam manages to get his opponent under control and not to let up with armlocks and Hip chokes. Ramon lobs still, lie a few effective slams, however, bring this little against the clean technology Sejam. The hard insert of the guys takes its toll and then the boots color red in places. The last 20 minutes dominated Sejam who no longer dismisses his opponents from the armlocks. One sees the anger in Ramons face who wants to free itself constantly but can not. That makes him furious.