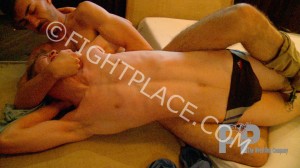 Knut is living in the Fightplace living community for a while now, but he’s not paying his rent. The boss got angry and he sent out Hardy to collect the rent.
But when he entered the flat he got surprised. He met the young Moe instead of the expected Knut. Moe wanted to decline the enter of the evil looking Hardy, but he was able to enter on his own special way. Moe seems to be a kind and peaceful boy, but this is just the first impression. Honestly he is a mad young man. He dropped of Hardy’s cap and both of them rolled on the mattresses, which were lying on the floor. Know didn’t knew anything about this trouble, because he took a shower at the other end of the flat.
Meanwhile Moe and Hardy fighting on a really hard and hot way, because Moe still doesn’t know who he’s fighting right now. When Knut entered the little Moe got free but now it’s getting serious.
Know remembered the blame he got in the last fight with Hardy, but today he shouted out for revenge. On a unexpected way he’s starting his act of revenge. Hardy is able to torture Knut with his feet but Knut put up anything on this afternoon. To the contrary: he bet him up.
Now Knut and Moe are always changing to beat up their strong enemy. This technique is very effectively but exhausting, too. The slim Moe is always able to show his hidden skills.
When Moe and Knut started to wrestle the Shit out of Hardy, the funny part was gone. The poor Hardy got tied up and gagged. Then he was totally freaking out. Today he needs to accept his defeat, because he had no chance to turn the fight.