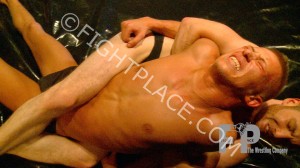 When Lukas and Marius met up after a long time, they didn’t need that much words. Just two words were enough: “Let’s fight!” The revange-fight between Lukas and Marius began. Every word they saved, both of the trained fighter used in form of power in this fight. Marius got way stronger, seemed like he is made of steel. He is very deft and uses many tricks. Lukas got more defined and still uses his feared Shaking-Scissors, which are hard to handle for his enemy. Marius is well known for his toughness and he tries to reverse whenever he can. This match is casual and well-balanced, with many hard Scissors in different variations. It was only at the end of the fight it appeared who was the better fighter.