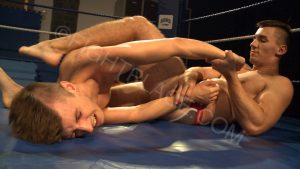 Knut who fights much more aggressive lately should cope with the much stronger opponent. His advantage: experience, speed and suppleness. Christopher with no experience but muscle packed should show his mettle.

They meet when Christopher poses in front of the mirror. It seems like he´s bragging and so they head for the ring.

The weight difference is 15kg but Knut shows the newbie how wrestling at fightplace works. Christopher has difficulties with his stamina while Knut has no problems suffering his holds, he´s used to it. But when Chris gets a grasp it looks bad for Knut and he has to use wedgies and hard boxing strokes.

When Christopher´s shorts nearly shredded he understands the pace and counterstrikes. At first a bit shy but towards the end he increases his temper.

They determine that the one who is thrown out of the ring three times loses the match. We wont prevail who is the last man standing in the ring.