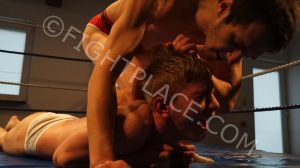 The humiliation Moe had to suffer through Basti in „Little Beasts“ should not be the last chapter of their fight history. Moe wants to take revenge on Basti.
Moe sneaks through a window into the gym to have the moment of surprise. But Basti discovers him quite fast and is astonished about Moe´s courage.
Indeed Moe is either very brave to enter the lion`s den or very reckless. He should know that Basti is a strong and hard opponent who is not really kid-gloved with his rivals. But Moe is fearless and enters the ring.
It´s a hard fight from the start on. Basti does not spare his opponent. Everyone should see what it means to challenge him. Moe has to suffer a lot already in round one.
But he is tough, waiting for his moments. And so we see nice tricks from him in round two. He can even bring Basti to the ground which makes him even more aggressive.
Now Basti is showing his evil side. Maybe it would have been better if Moe had not used ballgrabs. Because now he is punished for this effrontery.
Schoolboypins with grabs between Moes legs, scissors in all variations and many mean games show the repertory of Bastis tricks. If Moe would have known what expects him, he would not have set a single foot into the ring.