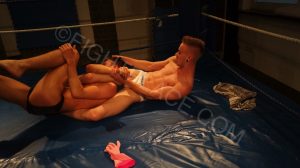 It was time for a revenge. In “Farmworker 2” Knut shredded Joes slip at the end of the fight.
That was a big humiliation for our little pretty boy and quite painful as well.

While Joe does his weekly training in the ring Knut is cleaning the bathroom. When Joe realizes that he sees his time for revenge and demands a fight. The pain of his shredded trousers still seems to be in his head and he tries to destroy Knut trousers today.

But Knut is quite boldly in such things and brings a box full of slips to the ring and dresses straightly into the next slip. But Joe attacks right away and Knut is totally exposed again. The fight turns into a stress test for slips since Knut now starts to destroy Joes slips as well.

The attacks are getting more brutal as well. They throw each other through the ring and mean tricks like ballgrabs come into action as well.

This fight is sexy, sporty and full of action. Will Joe be able to defeat his rival today or does he has to suffer his next loss? The very end of this energetic fightplace film will bring the answer.