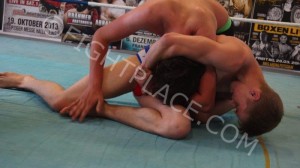 To be honest: No one got pushed to his limits at the first part of this wrestling afternoon. It is more a warm-up between our two fighters. Dustin (new at Fightplace) and Marvin know each other because they’re both riding Bmx, they are not in a good relationship. When they met each other in front of the boxing club, they got into trouble. Marvin sported with his body with bench presses in front of a mirror. He represented Dustin as a little worm. For sure, Dustin is smaller then him, but does he really needs to show of that? Now they wanted to fight out, who the stronger one is. They went into the boxing ring to fight it out. It’s admirable that Dustin had no fear. For sure he doesn’t know that many tricks like an experienced fighter, but in his debut he was very tenacious and presented lots of stamina. This is exhausting Marvin. The team thought, that Marvin just made a short work with Dustin. But no chance! Mostly the fight was well balanced and, to be honest, a little bit boring but then Dustin got wild and showed Marvin, that smaller guys could be stronger, too.

In the second part of “Push me to the Limits” you could really believe us. It was on the little Dustin got cocky, when Joe entered the club. And it was Dustin, too, who got pushed to his limits. Two fights in a row are hard to handle for the stamina of a new fighter. Dustin had to feel this on his own now. With surprising facility Dustin had to handle his opponent Joe. Joe seemed to be very narcissistic, presented his muscles to intimidate or to impress Dustin. We don’t know. Very hard wrestling without any show, where both of the fighters reached their limits. Not for tender hearts!