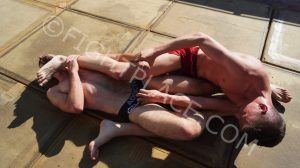 The last match of this afternoon David and Hardy are facing.
Hardy wants Tibet and Bubu disappear. He wants to be alone with David. What is he up to?
After both fighters get some good advice by their colleagues on the way to Bubu and Tibet pull back, then it starts. By fighting previously quite marked and still sweaty, they engage in. For David it sees only good, because he gets Hardy quickly on the ground and in its grip. But Hardy do not dither and goes full speed when he realizes that he is dealing with a pretty strong opponent. And then it turns out quickly why Hardy wants to be alone with him, Hardy wants to dominate him, want him for themselves, plus any funds placed are right. But the statement is not really on, because David resists extreme. But when Hardy David has only once in his power, he is nasty. Ballgrabs en masse, Gutpunching, Nippletortur, muscular riding. David helps only the direct counterattack with the same gait. Then we see how he can dish out and Hardy now has to take care that he is not dominated by David. Through a mixture of sweat and water, they slip up from time to time and can thus change the position.
Overall, a good, balanced fight in which until shortly before the end, the question remains as to who will gain the victory here. The guys deliver many hot moves with particularly long, hard ball grabs.